"... and I remember my youth and the feeling that will never come back any more--the feeling that I could last for ever, outlast the sea, the earth, and all men; the deceitful feeling that lures us on to joys, to perils, to love, to vain effort--to death; the triumphant conviction of strength, the heat of life in the handful of dust, the glow in the heart that with every year grows dim, grows cold, grows small, and expires--and expires, too soon--before life itself." 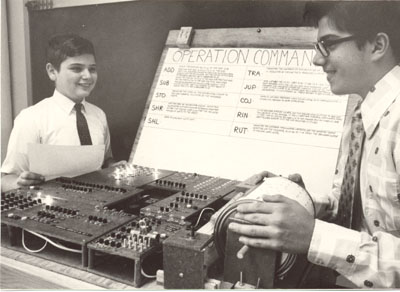 In the summer between 8th and 9th grade, my friend Kenny Antonelli and I built an electro-mechanical computer. We had been lucky enough to use our high school's HP2114B computer for a couple of weeks when it had been lent to our junior high school. The 2114B had a massive 8k words of core (yes magnetic donuts) memory, of which 4k was reserved for the Basic operating system, and the rest was available to the user via optical mark cards or by typing in via a teletype. The design of our computer was based on the book, "How to Build a Working Digital Computer" by Edward Alcosser, James P. Phillips and Allen M. Wolk. The book used paper clip switches, but we used our paper route money to purchase a zillion real slide switches from Radio Shack. We ganged the switches together by drilling a hole in each switch handle and inserting a metal rod through the holes of the switches that needed to be operated together.

The computer consisted of an input unit, an output unit, a program drum memory, an arithmetic unit, and a control unit. The drum memory was a paint can, that a patient of my father, who worked in a factory that produced paint cans, had grabbed before they put on the handles. The computer was powered at 2 volts AC via a surplus military transformer, supposedly used in a missile. Unfortunately, we didn't know which were the connections for the primary and secondary coils. A simple experiment determined that we had hooked the transformer up wrong, causing almost simultaneously: an immense amount of light to be given off by the 2 volt light bulb in the test socket, the AC fuse to blow, and my mother to rush into the basement room wondering what had caused the light that flooded the basement.

A program was written in a machine language, which we called Wierd (Written Idiomatic Expressions Reduced Drastically), and punched onto a file folder which was wrapped around the paint can, held on by electrical tape. A row of paper clips made contact with the drum memory and caused instructions to be lighted up. (This mechanism was not that reliable, and something more springy than paper clips was needed). The operator moved the appropriate switches to activate the instruction, and rotated the drum to the next instruction. Parameters could be entered directly into switch based registers.

Emmerack was about nine square feet (three to four feet on a side) and was contained in a wooden box that we built to hold it.

My parents ditched Emmerack, with my blessings, sometime while I was away at college. 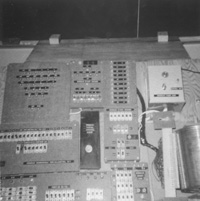 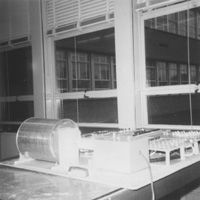 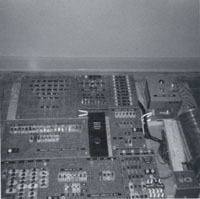 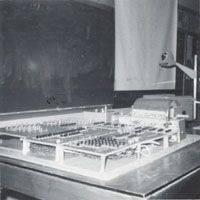 I'm always open to adding resources to my list, so if you know of other items, give me a holler: mbrmbr@acm.org